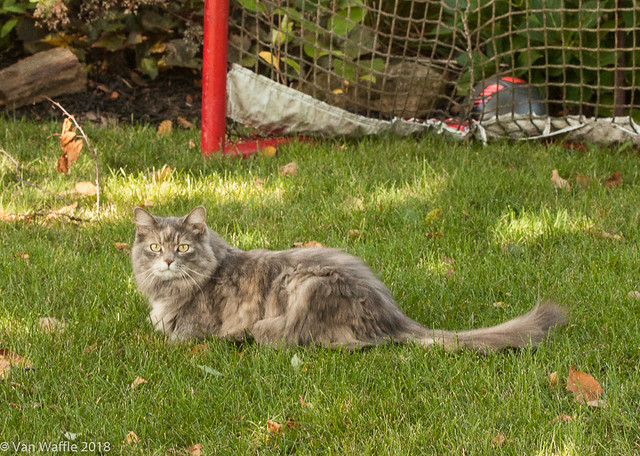 I don’t often see cats on my daily rounds. She ambled desultorily down the sunny street in my direction, until something in a side yard caught her attention. She moved quickly then and crouched in the lawn, losing interest in me until the camera focus beeped.

She reminded me of a cat my family adopted when I was 3. Grey Shadow came from the litter of feral kittens born perennially on the bluff above the beach. Many were killed by raccoons. A girl in the neighbourhood found homes for all of them that year. I begged my mother to adopt one.

As a young cat “Grey-grey” commuted back and forth with us every week from our cottage on Lake Erie to our permanent home in Windsor. She played tirelessly with me. We would chase one another in circles from the kitchen to the living room to the dining room to the kitchen. Then she would disappear behind the couch and wait for me to dangle a curtain pull down the back for her to bat.

But she hated the car and disliked the city. After we moved permanently to the place on Lake Erie when I was 8, she became a thoroughly outdoor cat by choice, an inveterate predator, no nonsense. Mom tied bells to her collar but it didn’t prevent her from killing all kinds of small creatures. Our younger cat, Smudge, was a monkey, a trickster, affectionate, but Grey Shadow barely tolerated the interloper. Curiously, she loved Christmas trees with their twinkling lights. Every year she would sleep underneath.

In the summer she only came indoors to eat, even when she became old, arthritic and deaf. She would lounge with us in front of the TV then go outside to sleep. She liked her people, but belonged to the land.

A stubborn old thing and too clever for raccoons, she defied the odds of life expectancy for an outdoor cat. She liked to nap in the sun in the middle of the lawn. Our dog, Tanya, would not allow other dogs into our yard when Grey Shadow was vulnerable.

Once a large hawk swooped down to pick her off. She leapt a metre in the air to meet it. I’ve never seen the cold eyes of a bird of prey look so surprised. It changed its mind and flew away.

Outdoor cats often simply disappear when the time comes. Grey Shadow was 19 the day she asked to come in. It was winter and she could barely stand on her hind legs. After spending some time indoors, she asked my mother for a final caress, then crawled behind the TV, yowled once and died.

2 thoughts on “Memories of an outdoor cat”