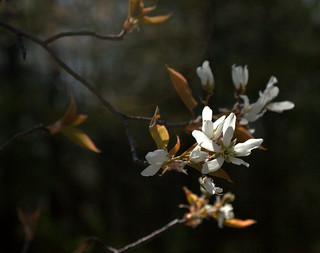 Today at University of Guelph Arboretum, fabric artist Lorraine Roy described her career to illustrate different ways of interacting with nature. As part of a series presented by the Department of Plant Agriculture, Roy’s seminar addressed: “Embroidered Tree: My Journey With Science and Art”.

Roy’s roots have grown deep at Guelph Arboretum. She graduated from the university’s horticulture program. She says it was paradise for her to work with the visionary R.J. Hilton, who worked in the 1960s and 1970s to set aside land for the arboretum. Roy helped upkeep an international woody plants seed exchange program, collecting and distributing seeds to other arboreta around the world. This nurtured a fascination with seeds and trees that began in childhood.

“I am not a scientist,” Roy claims. Her career as an artist began in 1986. However, her works ever since bear evidence of a continuing study of trees and geoscience.

The fabric paintings use natural elements to explore philosophical matters. Roy says people identify with trees because of their upright form, the expressive gestures of their limbs and the way roots dig into unseen truth. Trees have appeared as significant symbols in most mythologies and religions: for example, the Tree of Life and Tree of Knowledge in Christianity. Celtic cultures venerated the oak; they considered it bad luck to cut down a hawthorn, but good luck to bring branches of the spring blossoms into a house. Roy depicts trees growing on the Niagara Escarpment as symbols of triumph over adversity.

From early tree subjects, Roy’s works have delved deeper into the stories of seeds and soil. Seeds present a perfect “marriage of form and function,” she says. In autumn the cherry birch, Betula lenta, produces winged seeds designed to distribute by blowing across the snow. The Kentucky coffeetree, Gymnocladus dioica, supplies its beans with a nutritious supply of protein.

In all these works, a seed is not just a seed: it is a chinquapin oak acorn or a saskatoon berry. The branch, leaves, seedlings, soil and rocks all reveal aspects of true life. Roy says that science looks for knowledge, while art seeks to make that knowledge more accessible.

However, art also makes truth more appealing. Artists can be prophets by drawing our attention to things. These wall hangings introduce viewers to some of our rarest and most threatened woody species. Seeing the beauty, we must also acknowledge its transcience.

1 thought on “Lorraine Roy: Synergy of Art and Science”