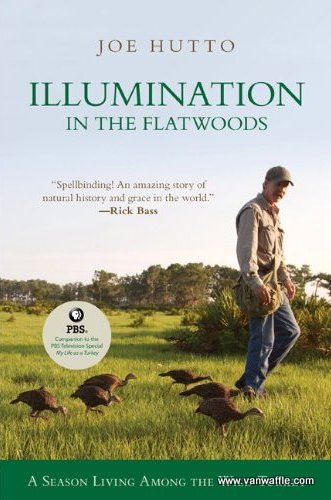 Naturalist Joe Hutto spent a year as the adoptive parent of a brood of wild turkeys. His journal of the experience not only portrays a moving human-animal bond, but dispels the notion that turkeys are stupid. In fact, Illumination in the Flatwoods (1995) raises doubt whether human intellect is superior.

He is not the first, of course. We frequently mock ourselves with visions of dolphins departing Earth, singing, So Long, and Thanks for All the Fish

; and so on. From the perspective of resource management, we humans are making fools of ourselves. However, Hutto’s assertion arises from awe and humility. It is rooted in love—a mother’s love.

Hutto had experimented with imprinting various animals to study their behaviour. He first encountered wild turkeys while hunting them as a child. They fascinated him but proved elusive and difficult to study. When given the opportunity to adopt some eggs from a farmer’s field, he eagerly accepted.

From the instant the first poult hatched and responded to his voice, Hutto’s outlook on life and the world began to change. He describes the journey with eloquent nature writing and a keen eye for observing detail—though perhaps not as keen as a turkey’s eye.

For a moment the little wild turkey lies motionless and helpless, striving to catch his breath. I remember to make a sound. Speaking very softly, just above a whisper, I make a feeble attempt to console him in what seems to be a desperate and confusing moment. Instantly, he raises his shaking wet head and looks me square in the eyes. In that brief moment I see a sudden and unmistakable flash of recognition in the little bird. Something completely unambiguous transpires in our gaze, and I am certain that the young turkey absolutely knows who I am.

Turkeys are precocious, able to walk and feed themselves at birth. Hutto spends that spring and summer guiding the young wild turkeys around the Florida flatwoods and introducing them to new experiences. However, he has a sense that they are teaching him rather than the reverse. They possess innate sense greater than he can impart of what is safe and edible, what snakes are poisonous, which situations pose threats and which can be ignored. Their elaborate vocalizations communicate specifically (for instance Hutto can tell whether they see a red-tailed hawk or a vulture), but a level of unspoken understanding also develops.

They seem more interested in exploration and observation than in hunting for food. Wild turkeys often seem to be profoundly motivated by wonder.

It is impossible to ignore the extraordinary state of awareness in these wild birds. As I watch them contemplate and scrutinize, it is difficult to describe much of their nature or various behaviors without resorting to the word “consciousness.” They seem in some way to epitomize that word.

A British film production company, BBC and PBS worked together to make a TV movie version, My Life as a Turkey. It is generally well-done and faithful to the book. A different brood of wild turkeys was imprinted on actor Jeff Palmer for the production. Hutto himself expresses admiration and surprise that the team was able to replicate the story so closely. The imprinting scene and another brief clip can be viewed on Youtube. Unfortunately the whole movie in unavailable outside the UK, but see it if you have an opportunity. Something this unusual and significant should be accessible to a wider audience.

The book records their daily activities, an easy rhythm through the landscape, which Hutto describes with fondness and insight. It has the repetitive quality of a meditation from which enlightenment emerges. Ultimately he concludes about the turkeys: “More alert, sensitive and aware, they are vastly more conscious than I.”

Contrary to the notion that humans can guide nature’s transformation to a higher level, maybe we are missing the point.