The charming wildflower, goldthread, is one of the earliest to appear in Central Ontario woodlands, even before trilliums. The ground around our cottage is covered with it, so I had a chance to take photographs when we visited for a few days to fix water pipes last week.

Goldthread gets its name from vivid, deep yellow rhizomes forming a fine network through the balsam fir and hemlock needles where it likes to grow. Another colloquial name, canker-root, indicates they’re useful for treating mouth cankers. First Nations Canadians utilized them so. As I seldom get these sores, I don’t plan to harvest any plants, preferring to appreciate their beauty as early spring ephemerals. 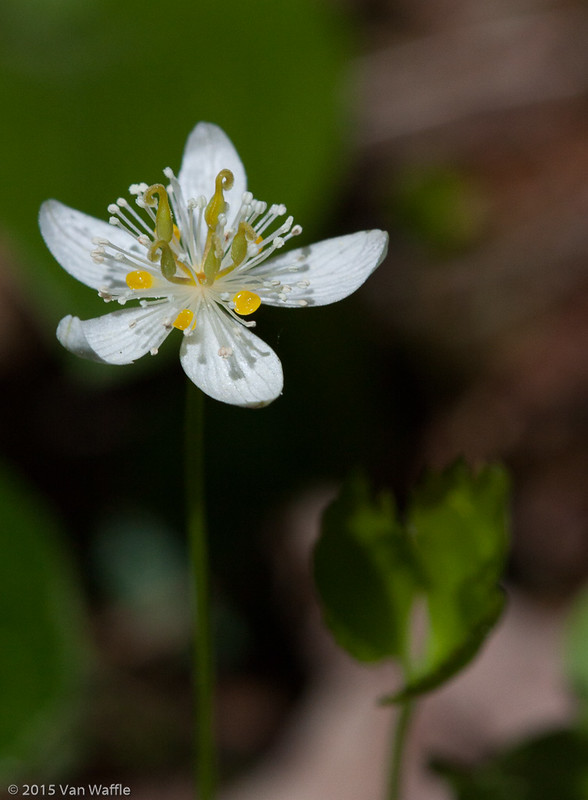 The Cree used the rhizomes to provide a “beautiful and permanent yellow dye” for quills and leather, according to 18th Century references in The Use of Plants for the Past 500 Years (Charlotte Erichsen-Brown, 1979). European settlers used the plant to dye fibre. The research for  Dye Plants of Ontario (Nancy J. McGuffin, 1986) using leaves and roots extracted pale colours at 1:1 plant to wool ratio, suggesting higher proportions are required for good pigment; “It is also used as an herbal medicine, and we suggest it should be reserved for this use.” I hate to think how many plants would be sacrificed to dye a useful quantity of fibre.

Goldthread is a member of Ranunculaceae or the buttercup family. It’s Latin name is Coptis trifolia, although I like the synonym C. groenlandica, indicating it ventures well into Arctic regions from Alaska to Greenland. I’ve never seen it in Southern Ontario, where few old growth forest remain, but its range extends through the cool Appalachians as far as the South Carolina.

The splendid jewel of a blossom, no bigger than one of my fingernails, isn’t primarily comprised of petals but sepals. In typical plants sepals protect and support the flower as it unfolds, but sometimes they evolve to do the work of showing off, attracting pollinators. Goldthread typically has five sepals, but I noticed a few with six or seven.

The petals in this case are the five short, gelatinous-looking clubs half-hidden under numerous, delicate pollen-producing stamens. This specimen has five gourd-shaped green pistils containing ovaries, but these might number from three to 10.

The plant produces a few low three-part, dark green, leathery leaves. One is visible in this photo. They’re evergreen, persisting under the snow. The star-like seed clusters can be used to propagate the plant, but must be planted when fresh.

The genus Coptis has a few species, several in western North America and several in Asia, but C. trifolia is the only one in eastern North America. It’s throughout the 10 Canadian provinces, New England, Oregon and Alaska. Its status is endangered in Maryland and sensitive in Washington.

It won’t survive logging or intense forest fires. It needs trees with a canopy open enough to allow some light. It doesn’t handle temperatures much above 27°C (80°F), which explains its absence from Southern Ontario woodlands. At our cottage it shares bedroom space with wintergreen (Gaultheria procumbens), partridge-berry (Mitchella repens), red trillium (Trillium erectum), corn-lily (Clintonia borealis), Canada mayflower (Maianthemum canadense) and pink lady’s slipper orchid (Cyprepdium acaule) among other wildflowers, all of which bloom a few days or weeks later.

I used to think of myself, a gardener and land owner, as a steward of nature. Now I realize nature is our steward that protects and nourishes every living thing. I’m grateful when it allows such graceful inhabitants to share the space where I live and take pleasure.

The vast majority of people residing across this huge country of Canada will never see goldthread, certainly not in flower, despite its abundance. It opens for a few days during the unpleasantness of black fly season, then quickly ends its show. But I’m happy to demonstrate its beauty here today.