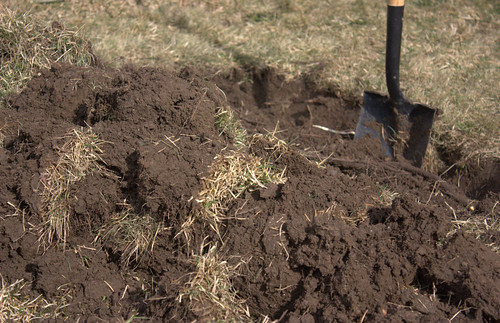 I have two other favourite times of year: Lilacs and August. But my favourite favourite is Dirt. It calls up memories of the first gardens I planted as a boy: first a small herb garden, then a larger vegetable patch across the road, and later a rockery on the bluff overlooking Lake Erie. My heart is rooted in soil. I love when the snow is just melting, everything is wet and the Earth smells like earth.

My birthday comes on the last day that can never be spring, except in California and further west, where the Vernal Equinox occasionally creeps ahead of midnight on March 19. But I am hooked on Ontario.

Usually my age clock clicks higher during the last throes of winter weather. Mom told me I was born during a week of sunny, 70-degree weather (it was a Thursday and we still used Fahrenheit).

What a gift it is to be able to go outside in a t-shirt on a day such as this and dig. And to find such nice topsoil in our new backyard. Dirt has arrived before my birthday with so much promise, incipient power, a dream of urgent growth. Thank you, 2012.