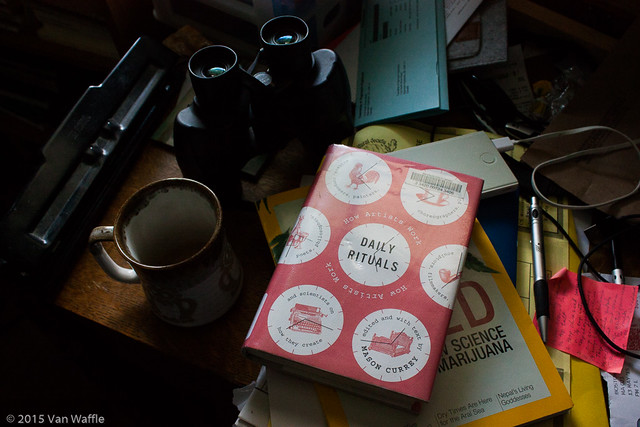 For many creative people, the only useful impetus to work comes from within. They must become skilled in the use of their own minds, and in structuring their time.

A few years ago, in my quest to establish useful working habits as a writer, I came across the blog Daily Routines by Mason Currey. It documents the sometimes mundane, sometimes bizarre lifestyles of artists and thinkers. Recently I discovered Mason has turned the blog into an engaging book, Daily Rituals: How Artists Work

, which I’ve duly and voraciously read.

I began learning about creative habits in Carol Lloyd’s admirable book, Creating a Life Worth Living

. She discusses “ecstatic task,” a brief morning ritual designed to ground a creative person in their essential activity, along with many other valuable psychological and organizational tools. I first read it long ago and have revisited it many times over the years. To Lloyd, an artist’s career takes shape partly from inspiration but mostly as a series of deliberate choices.

illustrates how humanity’s most productive minds thrive on routine, but usually these habits are unexpected. Only a very few work long, long hours on their primary output. Even noted workaholics like Stephen King devote only a few hours. He starts his work day around 8:00 or 8:30 every single day of the year, and writes until he reaches his quota of 2,000 words, sometimes by 11:30 but more often by 1:30. In many cases like his, the rest of an artist’s time is taken up with other jobs to pay the bills, going for walks, fulfilling annoying or obsessive tasks, or (in King’s case) simple leisure: napping, walking and reading. Many successful artistic people do their best work only three or four hours a day.

Eccentricities are widespread, of course. Beethoven often spent mornings in front of the washstand, bellowing, humming, striding up and down, and repeatedly pouring pitchers of water over his hands so much he often flooded the floor and became an unpopular tenant.

In the 1920s, Carl Jung built a tower where he lived in spartan conditions more suited to the 16th Century, lit only by oil, hauling and boiling water from the lake. It reminds me of our cottage, with no electricity except for a generator to pump lake water for washing, only propane for lights and cooking, no access to internet. I love the simplicity and seclusion.

What’s stunning but not unexpected is how many great minds depend on drugs for productivity. Frequently coffee, often amphetamines furnish energy and concentration, or barbiturates for sleep. Alcoholism appears widespread, though seldom contributing to creativity. Ernest Hemingway, a noted alcoholic, would rise and begin working at first light regardless of how late he had sat up drinking; he always looked great and seemed immune to hangovers, his son noted.

This interests me, because I too use substances – in moderation – to bolster creativity.

Early last year, at the age of 50, I was diagnosed with attention deficit hyperactivity disorder (ADHD). It came as a surprise because I was a good student in grade school – not so surprising considering numerous minor car accidents I had as a young man, difficulty processing stress and trauma, and trouble sticking with traditional jobs. It’s clear to me now that the endless hours I spent alone as a boy in my room writing involved over-focus associated with ADHD. However problematic it may be for me socially, writing remains my choice vocation, a skill in which I can achieve excellence.

In my early 30s trauma, severe depression and anti-depressant medication disrupted my sense of comfort in solitude, and my ability to daydream. This devastated my creative output. I couldn’t maintain focus, in fact for many years I couldn’t write fiction at all. But I needed to. I kept trying.

When I began working as a freelance journalist again in 2012, it brought back an important, lost piece of the creative puzzle. Deadlines motivated me. The process of developing a story idea, pitching it to an editor, working out the details, interviewing and researching, writing and turning in the assignment on time all provided a process that felt natural and achievable. It would take about three weeks from start to finish, the length of time I could comfortably maintain concentration before moving onto something new.

After the ADHD diagnosis I began using a small dose of Concerta most work days. It’s not an amphetamine, but another kind of nervous system stimulant. It facilitates close concentration for more hours of the day, more days of the week, helps shift focus from one task to another without loss of energy, and makes it easier to set aside problems that cause anxiety and distract me from work. Over time it has increased my confidence in being able to accept more tasks, responsibility and activities. As we all know, confidence matters a lot.

I’ve even felt some progress in the relentless effort to write fiction. It felt like I had writer’s block for a decade, reworking the same characters and plot lines, unable to move forward. But recently a positive shift began: a few grams of satisfaction that the groundwork is beginning to make sense, that I can move beyond chapter three and four. It’s a hopeful time.

Perhaps lack of concentration is normal. But distraction can defeat people who depend on an organized mind to achieve their ambitions. It’s an interesting question, whether medication might help or hinder their efforts.

For my entire adult life I’ve been wary of the abuse of alcohol. Caution is a good thing. I’ve survived some traumatic periods when the only thing I wanted was to escape the pain, but knew alcohol would only make it worse. I’ve never used it to medicate depression, and never more than an occasional drink to medicate anxiety or insomnia at the end of a day.

But there remains a connection between creativity and alcohol. When I write fiction, a glass of red wine can provide a classic release from inhibition. Ideas, dialogue and plot lines move in unexpected directions. The story takes on a life of its own. That’s the essential, spicy broth in which many writers love to stew.

My doctor, therapist and psychiatric specialist all look askance if I mention using any alcohol in combination with an anti-depressant and a nervous system stimulant. Alcohol is, after all, a depressant.

However, I subscribe to the motto, “Moderation in all things.” I only have four or five drinks a week, and never when revising or working on a paid assignment. At those times I need good judgment and attention to detail.

In hindsight, many of the rituals I’ve prescribed for myself  have served as a way of getting through the hard times when inspiration is scarce and productivity low. Most creative work is simply work. It doesn’t come easily, but with discipline we can keep at it and achieve satisfaction. My journalism is proof of this.

But when ideas start flowing more freely, as recently, my routines begin unraveling. I find I must work on fiction whenever I have time and feel inspired, not only in the late afternoon time slot assigned to it. I rush through (or skip) my morning ritual because I’m eager to start work. I often forget to eat lunch. Lately I’ve been reading into the early morning hours and sleeping late. I exercise, garden or bake when the whim comes over me. All these threads of chaos seem vaguely and superficially unhealthy.

Many artists in the book live nothing like this. Some are habitually driven, others slaves to extravagance.

But in a few like Umberto Eco, who claims to write erratically during interstices of time throughout the day, I find reflections of myself. René Descartes slept late, awoke to daydream, and “believed that idleness was essential to good mental work.” For years Charles Darwin led a quiet, leisurely, secluded life in the country, content in his family’s company, writing about other things, while keeping the controversial theory of evolution secret.

suggests I’m in good company. It’s light, amusing reading for anyone, but an affirmation for anyone seeking traction in the creative impulse. We can all find something to relate to in this range of obsessions and uniqueness.

It also persuades me to trust my own eccentricities. I might stop struggling to become an early riser or enforce a predictable structure on my days. Many, many artistic people, perhaps writers in particular, are insane. They have to be.

4 thoughts on “Creativity: surprising lives of the wise and wonderful”