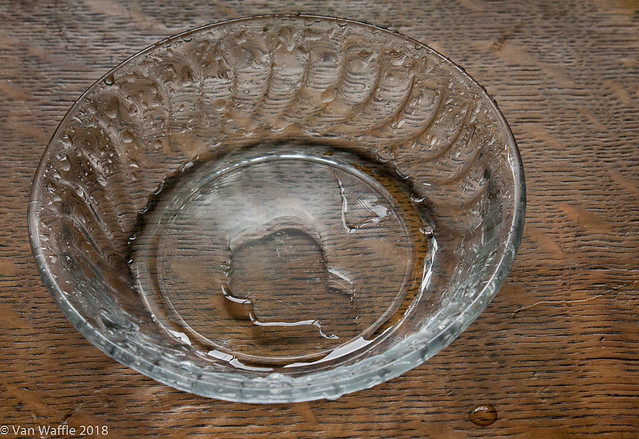 I took a dish outside, stood under the front stoop, and collected rainwater. I was tempted to gather it quickly from the gutter spout and go back indoors. To stand with my arm extended into the rain a few minutes was something completely different, closer to what I needed.

Two cars drove past. Embarrassed, I tried to hide behind the tomato vine and purple-flowered sweet-peas.

“How long must I wait?” I asked myself.

“Until the rain covers the bottom of the dish. In processing old sorrow, this will be a lesson in waiting patiently for everything to unfold.”

But the slowly growing puddle revealed an invisible, resistant convexity in the bottom. The rain, at first serious, began to mellow.

A young man in the duplex across the street came outside. He was wearing black jeans, a black t-shirt and nothing on his feet. He carried what appeared to be a small, lime-green pizza box in one hand and was talking to himself or on a phone, I couldn’t tell which. He darted across the lawn, tiptoed through the water sloshing down the driveway, opened the passenger door of his car and climbed in.

Perhaps someone was waiting to pick him up? But no, the car remained in place and did not appear to have a driver. He remained enclosed with his pizza box, his conversation now inaudible while the rain dwindled. I’m not the only person in the neighbourhood behaving inexplicably.

The rain couldn’t cover the bottom today but I was satisfied. Doing this had opened a small door for unexpected joy. It had a slight mineral taste reminding me of the spring where we collect drinking water for the cottage. A few drops of rain is enough to irrigate the soul. The droplets on my arm, forehead, and the front of my shirt are collateral blessings.

Sometimes joy and sadness are nearly the same. The path of grief is not what we expect.