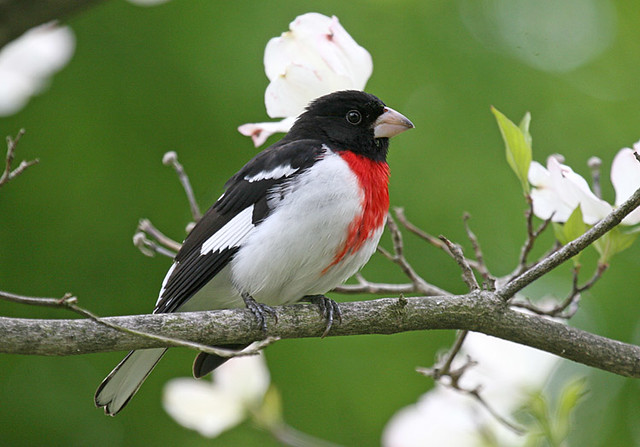 Opening the back door this morning, I heard a rose-breasted grosbeak squeak at me from the neighbour’s tree. He sat long enough for a nice look, then flew over our backyard and disappeared in the trees. He didn’t fly far though, before settling down to sing his drunk robin song while I puttered with potted plants on the deck. What a blissful way to start a spring day.

Rose-breasted grosbeaks are a good one for new birders to watch and listen for. Although forest birds, they like edges and newly regenerated areas, also frequenting city parks with mature trees and undergrowth. Though not as visible and exuberant as orioles and other species, the male grosbeak is one of our handsomest common songbirds, well worth the effort of  looking for.

Birding by ear will greatly increase your enjoyment of wild birds. As easy as birds are to see, most establish their breeding grounds just as trees are leafing out, so even colourful ones can be hard to spot. They are much easier to find and identify if you know the sounds.

Start by learning to recognize a few familiar species that frequent your garden or park, such as American robin, northern cardinal and black-capped chickadee. Then when you hear something different, follow the sound and try to find the bird with a pair of binoculars. This strategy will help locate other park and garden species like American goldfinch, house finch, song sparrow, chipping sparrow, Baltimore oriole, gray catbird, indigo bunting and yellow warbler.

Males sing to declare their territories for a few weeks. Once the chicks have fledged and left the safety of the nest, their fathers typically fall silent. By early July the morning chorus in most northern habitats becomes quieter. So late spring is the time to develop your bird listening skills.

in the car each spring to brush up and expand my familiarity with less common bird sounds. This is a 3 CD set purchased from Wild Birds Unlimited. A narrator provides the name of each species and then you get to hear several recordings of its songs and calls. Many other CDs and programs are available. Beware, some birding software may be geared more toward recording observations than learning to identify birds.

I have a great app on my Samsung phone, iBird Pro, which I sometimes use as a field guide. It provides visual identification, photos, range, sounds and more information about more than 900 North American species.

However, a strong caution is required here. Careless birders frequently play bird calls from their mobile phones to attract birds. This is a favourite trick of lazy wildlife photographers. It works. There is no better way to get a male bird to show its face than to make it believe it has an intruder.

It is unethical to disturb birds especially on their breeding territory but even at other times. Bird specialists sometimes use vocalizations as part of research or as an aid in tours, but do so with discretion and a clear understanding of the risks. I have occasionally used vocalizations during migration season, but even this is a dubious practice as the creatures are often exhausted and their physical resources are depleted.

Again: never, ever use bird vocalizations anywhere near where they might have active nests. If you want to use a program like iBird Pro in the field, use ear buds.

Or familiarize yourself with bird songs at home. Recordings can be found free online. All About Birds from Cornell Lab of Ornithology has an excellent library and quizzes. Quizzes are one of the best ways to test your own skills and help remember the differences between songs.

One challenge is that different species often have similar songs. But birds can hear the difference and so can we, with practice. These similarities can actually help with the learning process. For example, if you know the song of an American robin it can help pick out similar songs. A scarlet tanager sounds hoarse, like a robin with a cold, and only nests in deep forest.

The red-eyed vireo sounds a little like a robin, too, but hesitant and broken, as if it’s asking the same question over and over. And over. It does so from the top of a high tree on a hot July afternoon, never tiring of its tedious existential inquiry weeks after other birds have finished talking.

The rose-breasted grosbeak’s song also resembles a robin’s. However, its vocalizations are relatively easy to distinguish from other birds’ in Eastern North American woodlands, and easy to learn. Listen to the sound files on All About Birds. I describe the grosbeak’s song as a “drunk robin.” It is more awkward, musical and cheerful than a robin’s, with a few slurred notes.

You will more often hear its distinctive call note, a brittle squeak, like a sneaker on a gym floor. A call is a note of alarm or scolding, while the song simply says, “Here I am. This is my space.”

If you hear a rose-breasted grosbeak it’s worth the time to look for this black-and-white bird with a vivid crimson breast, like a stab wound. The female is much plainer, sparrow-like, brown and white with a streaked breast. She doesn’t sing but makes the same unmistakeable squeak. Both birds have thick bills, true to their name. They are squat and smaller than a robin, best viewed with a good pair of binoculars.

Keep your ears and eyes open for this memorable bird on your springtime rambles. Let us know what other birds you see and hear.