Around 2008 the population of the world’s cities surpassed the number of rural dwellers. A lower proportion of people live on the land, yet we depend on it more than ever for sustenance. The Earth shows increasing signs it will not tolerate continual consumption of resources, abuse of soil, air and water, and indifference toward biodiversity. 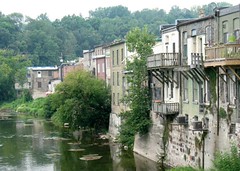 Traditionally nature writers have looked to wilderness for inspiration and insight. We must protect wild, unspoiled spaces, but countless people tied to cities by poverty cannot relate to this rarefied vision. Western environmentalism cannot appreciate the exigencies of securing food and shelter for more than one-third of the human population who must live on less than $2 per day. We must seek reconciliation with our entire planet by interacting with nature where we are. It plays a vital role in the urban landscape, too. Perhaps here we can begin the healing process.

Van Waffle is a writer, naturalist and artist living in Guelph, Ontario, a city of 115,000 at the confluence of the Speed and Eramosa Rivers. Rivers present a valuable metaphor for life: you can scarcely grasp where the water comes from and where it goes, but the short segment right in front of you possesses rich ecology. You can learn much from a few metres of current. It connects to a global hydrological cycle just as one life relates to all of life.

Van has a BSc in Wildlife Biology and Ecology from University of Guelph (1987) and a Journalism diploma from Conestoga College (1988). He has worked as a small town reporter, and as a media relations writer for World Vision Canada. In addition to his writing work, he also builds pipe organs for a living.