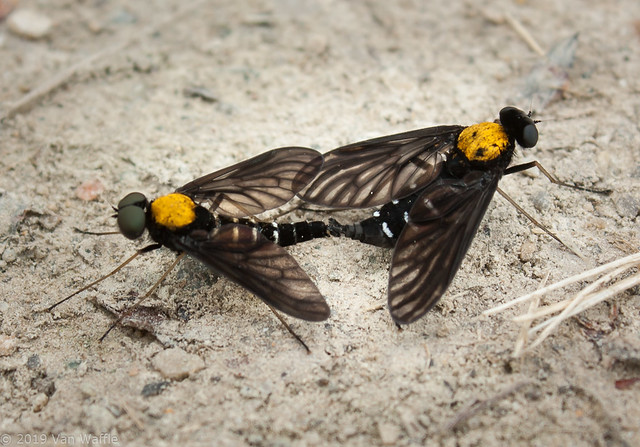 I came upon this unfamiliar insect species today. Spectacular!

It’s a pair of golden-backed snipe flies, Chrysopilus thoracicus, identified thanks to BugGuide. I knew these were Diptera (true flies, having only two wings – most adult insects have four) but my knowledge would have gone no further. Fortunately a photo of this species appeared on the order’s first page lineup.

An online search brought up only that little is known about this species’ life cycle. Based on the natural history of other members of the genus Chrysopilus, it is suggested the larvae live in rotten material and prey on smaller insects. The adult fly might be similarly predatory on insects, or it might eat nothing. Mysterious, eye-catching creatures.

We know how the golden-backed snipe fly mates: like this. The female can be distinguished by her larger abdomen, the male by his larger eyes. The pair rested on a gravel footpath a few steps from mature deciduous woodland and from a small creek in a suburban park in Waterloo, Ontario. My presence did not disturb them.

I had deliberately left the macro lens at home to focus on the landscape during this morning’s walk. Fortunately the standard lens took a decent shot, but I wish I’d had the macro. So much for landscape photography today. When I’m not looking for details they must fall in my way.