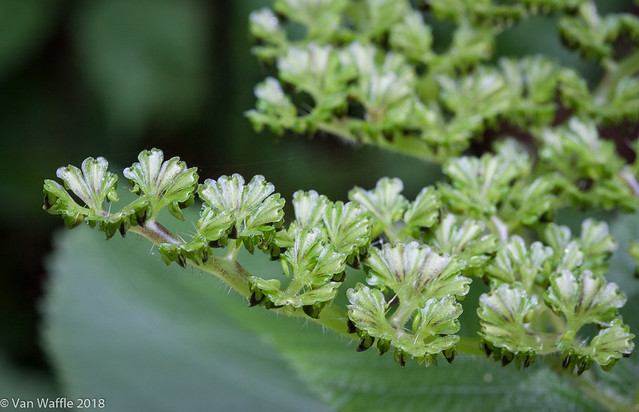 I’ve been trying to identify this plant in the woods ever since we moved to the neighbourhood three years ago. It strongly resembles stinging nettle, Urtica dioica, but isn’t. Finally today doing a broad Google search I found unambiguous images that solved the mystery and introduced a new plant for foraging.

The plant is Laportea canadensis, Canada wood-nettle. It’s a more attractive, less coarse plant than stinging nettle, with broader, glossy leaves. It grows in wetlands or open, moist woods like the one in my neighbourhood. The flowers are whitish and a little showier than stinging nettle, reminiscent of astilbe. Late in the summer they produce the interesting seed heads shown above, which helped me identify the plant.

I had been stumped because the Peterson field guide (1968) I rely on for most wildflowers includes several close relatives of the stinging nettle, but not this one. This seems like an oversight. Canada wood-nettle is a member of the nettle family and occurs throughout Eastern North America. It’s included in Wetland Plants of Ontario (Lone Pine, 1997) but without a photo. Anyway, I would not have thought of it as a wetland plant because I’ve only seen it in the woods. Here’s a photo taken when the plants were in bloom in July 2015. 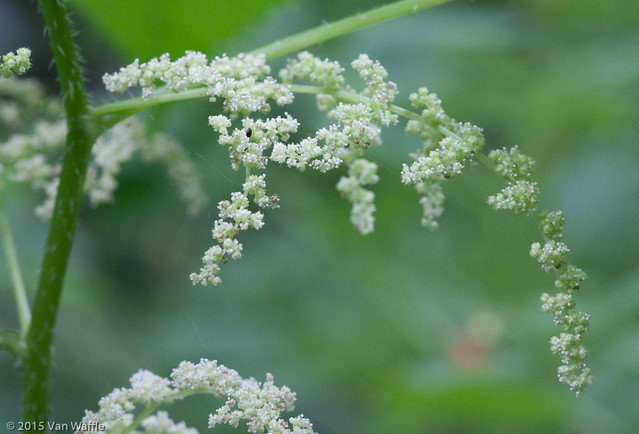 To add to my confusion, this plant doesn’t sting me. All the resources insist Canada wood-nettle has stinging hairs. I can see them. They look like stinging nettle hairs, but finer and softer. I’ve tried many times unsuccessfully to sting myself. Apparently I’m too thick-skinned.

I’m pleased to learn this plant is native; stinging nettle isn’t. As far as I can tell, it’s the only native species of Laportea. Several other members of the genus occur on other continents, often in tropical climates.

Like stinging nettle, Canada wood-nettle is reputedly edible, nutritious and delicious. This is good news considering it occurs in abundance a three-minute walk from the front door. Nettles are among the first herbs to emerge in spring, and are best eaten within the first two weeks. I’ve tried eating them later, after the stems become woody, and the leaves were impossibly bitter.

Avoid skin contact by harvesting with gloves. Cooking or drying destroys the sting. However, boiling quickly leaches nutrients and flavour. I’ll try steaming them in the microwave, as I do stinging nettle. Nettles make a good substitute in any recipe calling for cooked spinach.

Me foraging for nettles along the Eramosa River