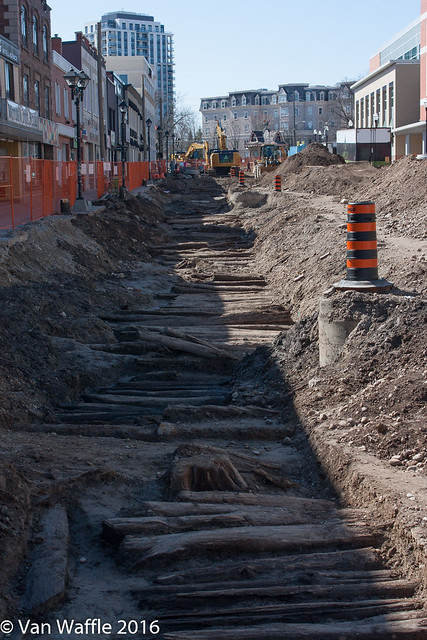 Last month construction workers in uptown Waterloo uncovered a corduroy road beneath King Street. According to archaeologist Charlton Carscallen it was probably one of the first roads in the region built by European Settlers. He suggests it was constructed before 1816 by Mennonites who moved from Pennsylvania after the American Revolution.

Corduroy roads are made of rough logs laid down at right angles to the direction of travel, then covered with sand. They were used to prevent horses and vehicles from getting mired in mud through wet, swampy areas. Such roads were used in Europe since at least 4000 BCE. They could be a hazard to horses if the logs shifted. In this case not only felled logs but also tree stumps are visible.

King Street is being excavated to make way for a new light rail transit line. The project is not without controversy, particularly due to the heavy toll on local businesses.

Construction halted in March when the historic road was uncovered, as required by law. Archaeologists have now finished documenting it, and removal of the logs is expected to begin in a few days.

I wanted to glimpse this piece of history before it disappears forever.