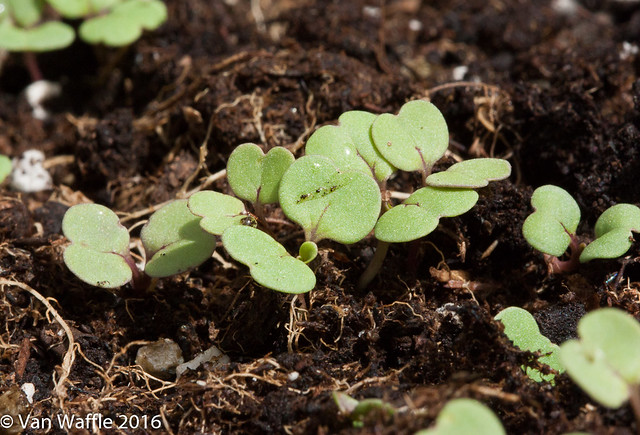 My neighbour disapproves of me gardening before the end of May. He doesn’t say so directly, but makes sidelong references to inevitable cold weather and the threat of frost. I don’t argue but carry on like the ant in the parable, hoping the outcome will prove me right. Early planting can extend the season considerably.

Some vegetables can be sown in the garden as early as the soil can be worked. That means when the frost is gone and it’s not so wet that digging harms the structure of clay soil. To test it, try making ball out of a handful of soil; if it won’t stick together it’s safe to dig.

Vegetables that can be grown at this time include many leafy greens:

Thanks to a southern exposure and raised beds, my garden became workable during mild weather in late March. I sowed kohlrabi, kale, arugula (photo above) and spinach.

I like to cover the seeds with a sheet of corrugated cardboard for a few days. This keeps the warm, sun-drenched soil evenly moist and provides protection against the harshest weather. I check under the cardboard every day and remove it as soon as seedlings appear. But don’t try this with carrots or lettuce: they need sunlight and won’t germinate under cover.

Then we had some more cold weather, hard frosts, ice storms and persistent snow. You might expect all that severity to nip my seedlings in the bud, but it didn’t. Fast-germinating seedlings in the cabbage family simply stopped and waited for the weather to warm up again. Spinach, on the other hand, takes several weeks to germinate. It did its preliminaries under the snow. Now this week it’s cropping up happily.

I like to garden slowly: not too much work all at once. It’s easier on my body and lets me spread out the pleasure of planting things. Each day I undertake a few tasks. Unfortunately I lost my chance to plant Swiss chard and beets before more snow flew. Instead they went into the ground today, to mark Earth Day (April 22).

Carrots can handle frost but I’m cautious about planting them too early. The seeds are small, they need to lie exposed on the surface and they take about three weeks to germinate, so I don’t want to expose them to the ravages of late winter storms. I deliberately saved them to plant now. About a month before last frost is right. Early varieties could be sown much sooner under clear plastic row covers, but I’m not that technologically advanced.

Peas can rot in cold, wet ground. Save them too until winter has done its worst. Then be prepared for them to germinate and grow quickly.

You must wait until after last frost to plant:

Hardy perennials can also be planted and transplanted early. I decided to move most of my perennial herbs out of the square-foot garden to make more room for a succession of vegetables. In March I moved French tarragon, sage and thyme into a big barrel for the season. Some of the herbs, particularly the tarragon, got frostbitten by the late winter storms, but it was quick to recover. 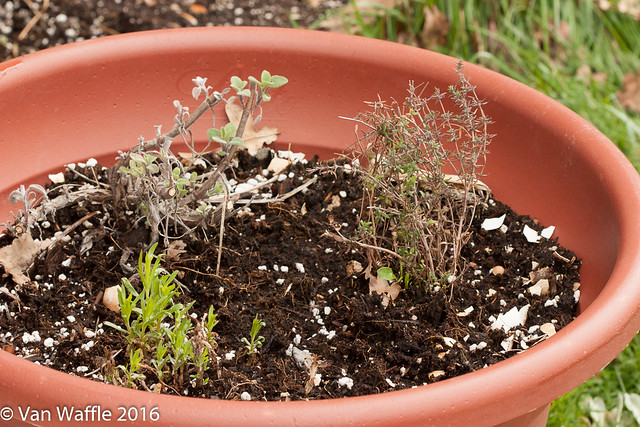 If you want to plant trees, Earth Day is a good time. It will give those saplings time to establish their roots before drought hits. In fact, trees will do even better if they’re planted in the fall. Their roots continue to grow in winter, searching out new sources of moisture and nutrients. Spring is alright but make sure to give that sapling lots of watery attention through the coming summer.

Once the weather warms up it’s too late to transplant trees and shrubs. Sure, people do it, but you’re making an unfair demand on the plant to establish its roots in summer. It’s unkind. Be patient and wait until next fall. The tree will become better established and grow more quickly anyway.

Ontario’s growing season is so short we must do our best to extend it. Last year thanks to early sowing I harvested spinach, leaf lettuce and arugula in May, peas and kale by mid-June. Maybe if the neighbours are envious enough, they’ll try it too.