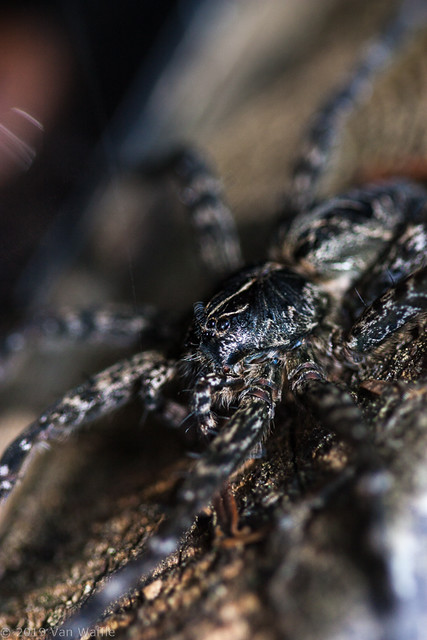 Since I’ve been practicing all winter with the macro lens, it’s going to be fun exploring the cottage environs this year. All the photos here were taken on or from the dock on our lake in Algonquin Highlands, Haliburton County, Ontario over the July 1 weekend.

Here’s a shot of one of several Dolomedes dock spiders inhabiting the dock. These are terrifying to behold, Canada’s largest spider with about a 3″ leg span. However, they are timid and not aggressive. They don’t spin webs but are skilled fisherman. They can both dive and walk on water. Last summer I observed one subdue and eat a large dragonfly equal to its size, which must have accidentally landed nearby.

Apparently these spiders can bite people if grabbed or caught in clothing. The bite is painful but not dangerous unless you’re allergic. However, I’ve been interacting with them all my life and have never known one to bite anyone even when handled accidentally. They are more interested in escaping.

They trigger my arachnophobia less than most spiders. But this weekend even I was a bit creeped out by three large dark ones (male, I think) running around and vying for attention from an even larger grey one (female). Males die within hours after mating. 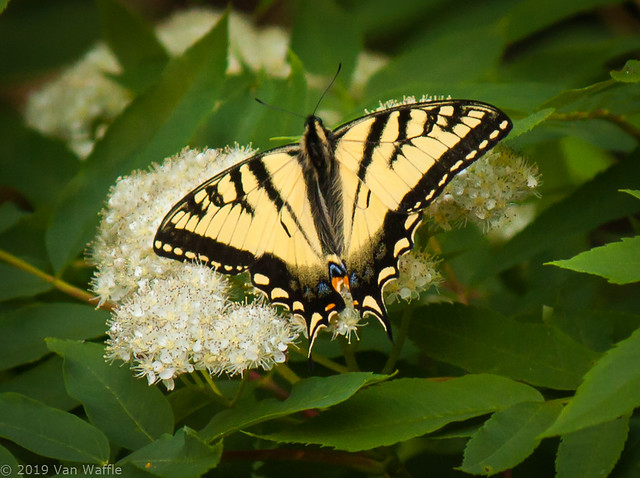 This wasn’t the first Canadian tiger swallowtail I photographed this year. In fact there were two on this same mountain-ash tree at the same time. There seems to be a strong flight of Papilio canadensis this year.

These two were special because my partner and I had just arrived at the cottage on Thursday, I went to admire evening sunlight over the lake, turned around, and found two of them feeding on the mountain-ash tree right beside our dock. They stuck around.

I ran to get my camera. I had to attach the rarely-used zoom lens because they were 8 feet up in the tree over shallow water. I could see them clearly, but couldn’t get near. When I returned, they were still there. After a minute I ran back for the tripod, and persuaded Danny to come look.

The swallowtails weren’t going anywhere. Spring has been so delayed by cool weather and rain, some aspects of summer seemed to be barely seeping into cottage country. Many animals are guided by the sun, but plants have had to wait for the weather to guide them. I guess there were few summer flowers for these butterflies to sip.

They found our isolated Sorbus americana, and there they drank and drank. Swallowtails I’ve seen along roadsides and in the city park have been constantly moving, passing all kinds of flowers, looking for whatever – or smelling whatever it is they smell for.

These two hardly moved all evening. One flew a desultory circuit around the bay before returning to the same few flowers. The one with a damaged wing posed for me, and posed and posed again. It was missing one swallowtail. After I had been photographing it continuously for 10 minutes, the other butterfly suddenly moved in good view of the camera, and spread its wings. They were perfect… Snap! 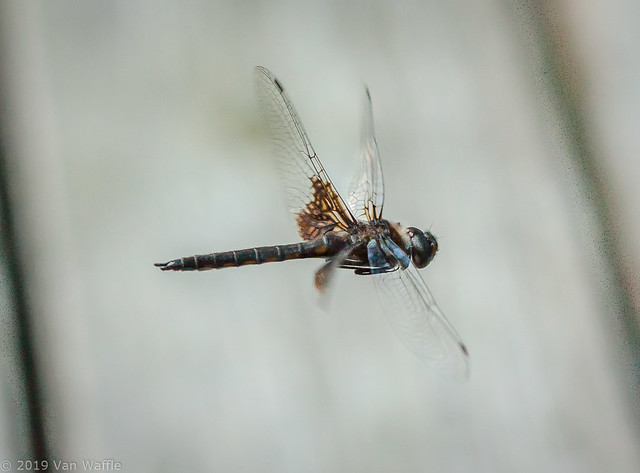 Standing on the dock in the evening I attracted a cloud of mosquitoes, which in turn attracted this common baskettail dragonfly, Epitheca cynosura. These were abundant around the lake over the July 1 weekend. They seemed more dimwitted than other dragonflies. Driving slowly along the road I couldn’t avoid them flying in front of the car. At least there were many of them.

This is one of my first efforts at photographing an insect mid-flight. The dragonfly would hover in place for a moment before snatching a mosquito. 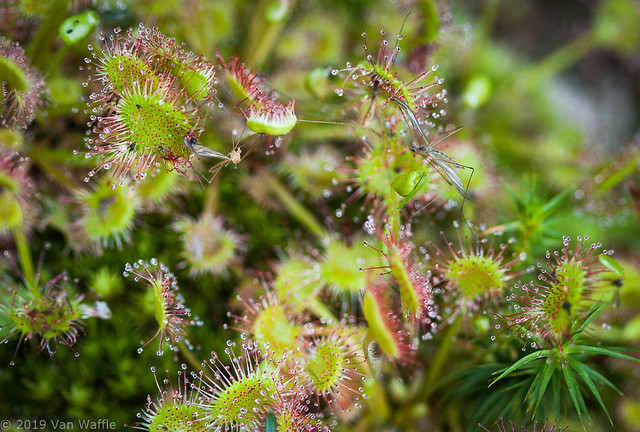 Round-leaved sundews (Drosera rotundifolia) are ubiquitous carnivorous plants around the lake at our cottage. You’d hardly notice them they’re so small, crowded along the waterline where moisture leaches all the nutrients especially nitrogen out of the soil.

The sundews seem to be thriving with so much rain, perhaps because there are more bugs than usual. When I stopped to photograph this clump, the cranefly in the upper right was struggling uselessly for its life. The leaves trap insects on the sticky hairs. When a bug struggles it pulls the leaf closed around itself and gets digested.

These plants were littered with arthropod carnage. The sundews looked bigger, stickier and more vigorous than usual. Good to see something benefitting from weird weather. 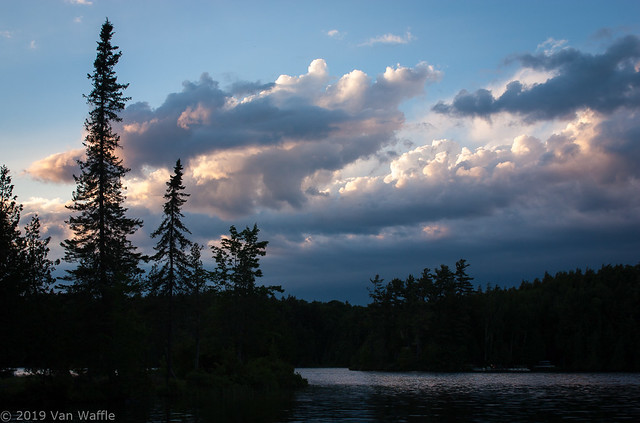