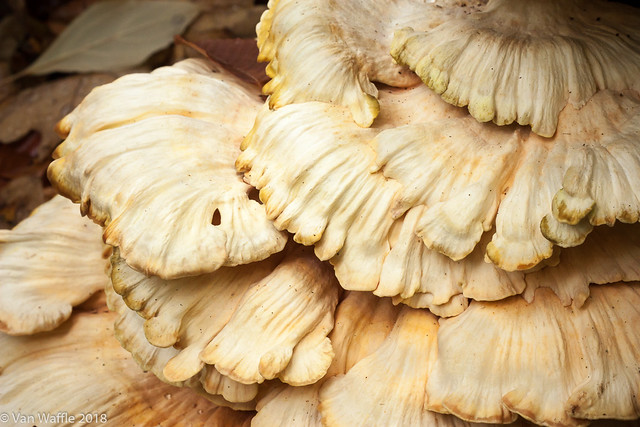 Wild mushroom expert Patrick Louch said chicken of the woods was one of his favourites. I never had an opportunity to try it until this week. It’s a taste experience I won’t soon forget.

I interviewed Patrick for a story in Edible Toronto in 2014. He took me and my partner on a mushroom foraging excursion in Muskoka. He introduced us to black trumpets, hedgehog mushrooms and chanterelles, which he sautéed in the back of his truck for us to sample.

We didn’t find chicken of the woods that day. He mentioned it is one of his favourites, partly because it can be found in Southwestern Ontario, outside the rich myccorhizal mecca of cottage country. So I’ve kept my eyes open. Patrick’s photo of one appeared on the cover of Edible Toronto that issue.

I have to admit I wasn’t the one to find this clump in the woods outside my back door. On my Monday morning walk I saw a young man stepping gingerly out of the woods onto the trail. He had a camera phone in hand. We greeted one another. Passing the spot where he emerged, I glanced aside to see what he had found. A big clump of bracket fungi stuck out from a maple stump.

I duly stepped aside to grab an image on my phone, too. The young man turned back and asked me about it. He had taken a photo to identify it. I said honestly I didn’t know what it was. We compared notes about finding giant puffballs in the same woods. Last fall I found one the size of a soccer ball, dried most of it, and crumbled it into soups through the winter. But giant puffballs aren’t as tasty as many wild mushrooms. 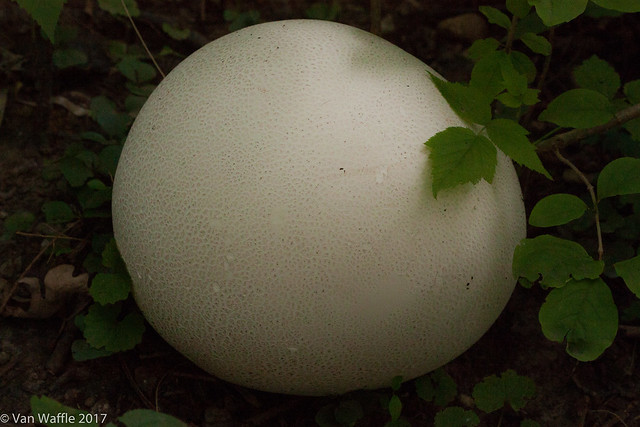 Back home the Lone Pine field guide, Mushrooms of Ontario and Eastern Canada led quickly to chicken of the woods, Laetiporus. Surprised, I checked other images and websites online for confirmation.

If you decide to forage for edible wild mushrooms, I strongly advise learning from an expert. The wrong mushroom can cause a painful death. Don’t try anything new until you’ve checked it with somebody who knows their fungi.

Chicken of the woods grows on wounded wood, stumps or trunks of dying or recently dead trees. It prefers hardwoods such as cherries, oaks, or in this case a maple that was cut down by the park crew because it was overhanging the path.

I wouldn’t taste this mushroom if there was any doubt in my mind. It’s also advisable to sample a small amount at first to make sure it doesn’t disagree with you.

I was afraid the young man would return before me and harvest all of it. He would have been in his rights to do so, even though the clump was large enough to serve a feast to several families.

Tuesday morning it was raining, so I didn’t go for my habitual walk. But the sun started to poke out around noon. I gathered my camera and tripod and returned to the maple stump.

The entire growth was still there. No one had touched it. I spent a pleasant while photographing it.

Then I harvested less than a quarter of the clump. It was enough for several meals for us. I left enough for the young man to find lots if he returned, and for anyone else who knows their mushrooms.

The peach colour of the fungus was more evident once the top surfaces were exposed. The underside is a sulphur colour. The underside can also be white. 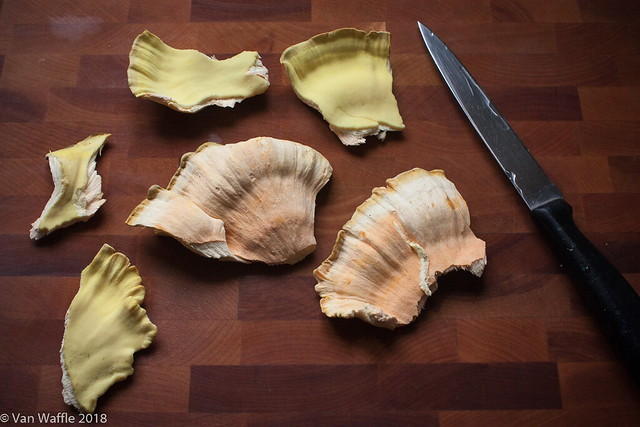 I simply fried the pieces in butter in a cast-iron skillet. The Internet offers several interesting recipes for chicken of the woods. It is clearly regarded as a delicacy. However, I prefer to enjoy wild mushrooms untainted by other ingredients, to appreciate their inherent flavour.

Chicken of the woods is drier than other wild mushrooms I’ve eaten. It retained its firm texture after sautéing. It had a distinct chicken flavour with a smoky barbecue quality from the cast-iron. The edges were even crispy. It reminded me of jerky but without the toughness, or flatbread with amazing flavour.

It was positively the most delicious wild mushroom I’ve tasted yet. My thanks go out to Patrick for the recommendation, and to the stranger in the woods who inspired me to look aside.

This morning the whole thing was still there. Nobody else has touched it. If it’s still there tomorrow I might collect more before it goes to waste. I want to try roasting some for a main course.