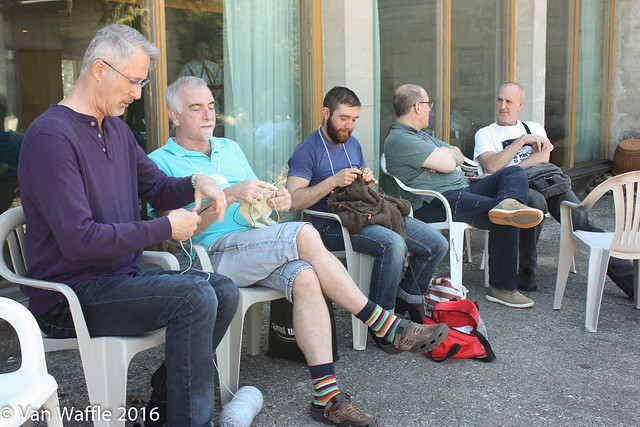 The idea of creativity invokes arts, crafts and design. We usually use it to describe an individual or small group of collaborators who create something with sensual impact like a musical composition, a knitted shawl or an innovative ad campaign. Tangible creativity blossomed during the first Canadian men’s knitting retreat, which took place this past weekend, April 15 to 17, 2016.

Social interaction can manifest another kind of creativity that’s less tangible but equally rich. We often experience this when people meet. Diverse talents and ideas create an unexpected outpouring of emotion, thought and inspiration that wouldn’t happen otherwise. When conditions are right, the sum can be significantly greater than its parts. Extended time together multiplies the effect. This is why people like to hold conferences, conventions and seminars.

I have experienced this in a particular way with men’s knitting retreats. And yesterday (Sunday) morning, when the 19 men met for a final time, as their thoughts and impressions unfolded in our midst, I knew something remarkably good had happened. I might have known earlier in the weekend as I saw the men knitting together in the sunshine, sharing meals, embracing a friendly baby goat and gaining inspiration from workshops. But I had had a hand in organizing it this time and it’s difficult to inspect one’s own creations objectively. The feedback confirmed my belief that the retreat had impacted everyone in a positive, lasting way.

Carol Lloyd’s book Creating a Life Worth Living describes the kind of creativity that involves human interaction. Certain creative types express themselves in intrinsically social ways, for example healers, teachers and directors. Lloyd calls the kind of person who organizes events a realizer. He or she relishes problem solving, provides driving energy and has good communication skills to build community. 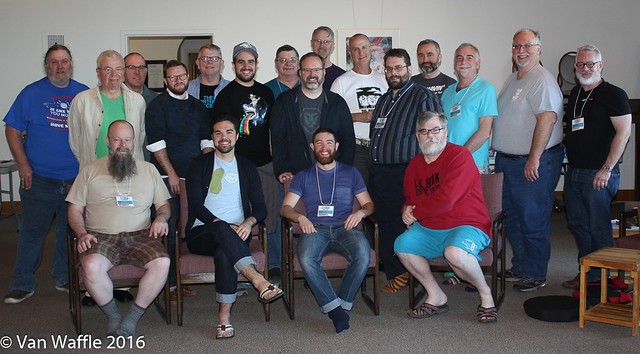 I think a realizer is also someone who senses commonalities, likes bringing people together and gets satisfaction from seeing them interact.

But the spirit of these retreats comes much more from the diversity of men who attend them. It’s like a patchwork quilt where everyone provides a square. 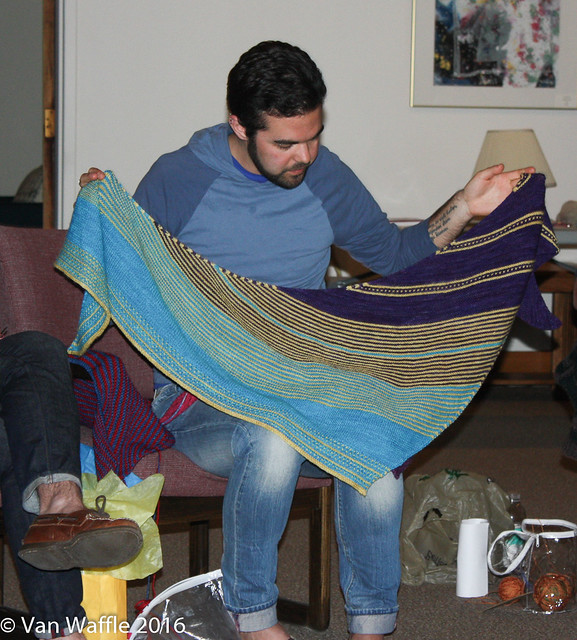 Here are a few things we did together: 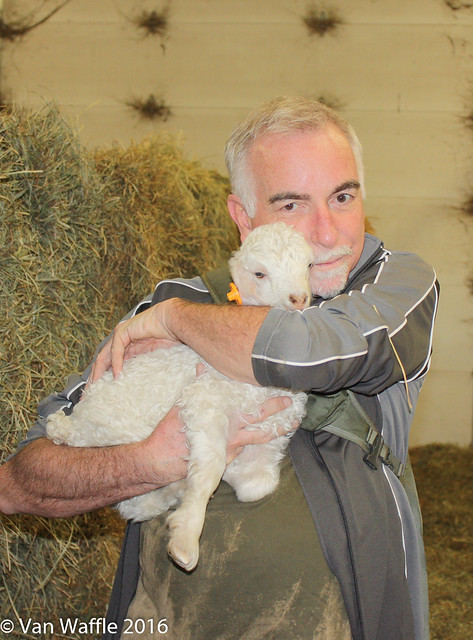 The group collectively expressed great appreciation for Loyola House Retreat Centre, our accommodation. The rooms were particularly comfortable and the meals got rave reviews.

As the group said its goodbyes, they left with strong support to repeat the retreat again next year. Most raised hands in support of starting a day earlier (on Thursday). So we have something bigger and better to look forward to.

Loyola House has room for 30 to 50 people. We didn’t achieve the minimum, but Loyola House kindly charged us only for the number who registered. Our challenge for next year will be to get 30 registered. Based on the enthusiasm from all who attended this year, I don’t think we’ll have trouble spreading word and generating enough interest for Men’s Knitting Retreat North next time.