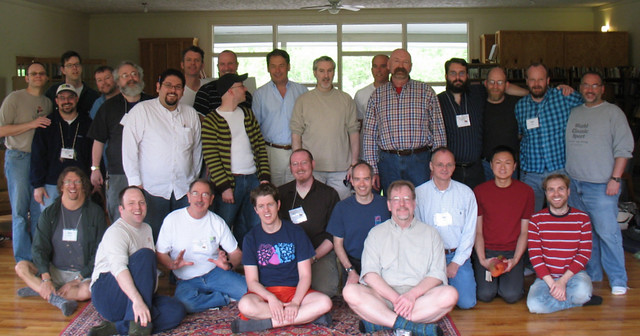 Next weekend, April 15 to 17, 2016, the first Canadian men’s knitting retreat will take place. I’ve had a hand in organizing it and can hardly wait. This is the realization of a long-held dream.

Men’s knitting retreats started in May 2008 at Easton Mountain Retreat Center near Albany, New York (group photo shown above). My partner Danny Ouellette and I happened to be there and we’ve been lucky to attend more at the same location. Retreats have spread to other areas, so that several now take place every year across the United States. They have also occurred in the United Kingdom and New Zealand.

At a men’s knitting retreat, people who identify as male get together to relax, spend time knitting together, teach and learn new skills and come away inspired. These retreats continually overcome my cynicism about human nature. They make me want to participate more in human community. And they provide an opportunity to do so.

What makes them so special? All the retreats in different places keep themselves deliberately small, less than 50 individuals. You get to know one another. By the end of the weekend there will hardly be any strangers. 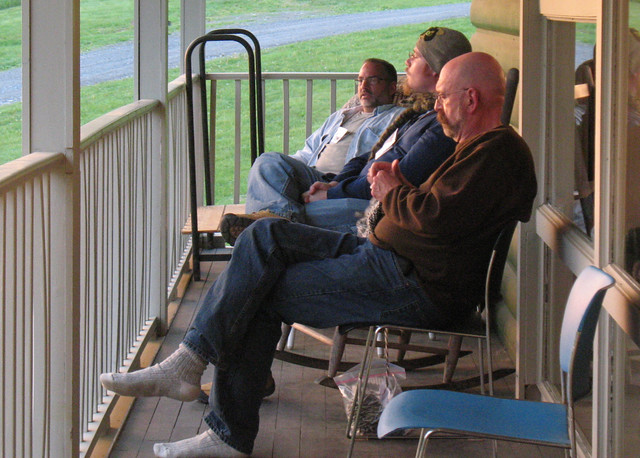 There’s nothing new about men knitting. The Vikings did it. Fishermen did it. Now bankers, lawyers and artists do it.

But in our culture I think it’s fair to say men who knit often do it in solitude or in the company of women. There’s nothing wrong with that. I’m fortunate to have many women friends who are fibre crafters. I’d never choose to give up their company. It has enriched my life.

But for me something different happens when a roomful of men knits together. I suppose I let down my guard in a way I don’t around women or other men. Being creative is an essential, essential part of who I am. I don’t have to act more or less manly than I am. And even though a lot of men like to knit in macho tones like brown, blue and grey, I don’t feel compelled to hide my passion for colour. 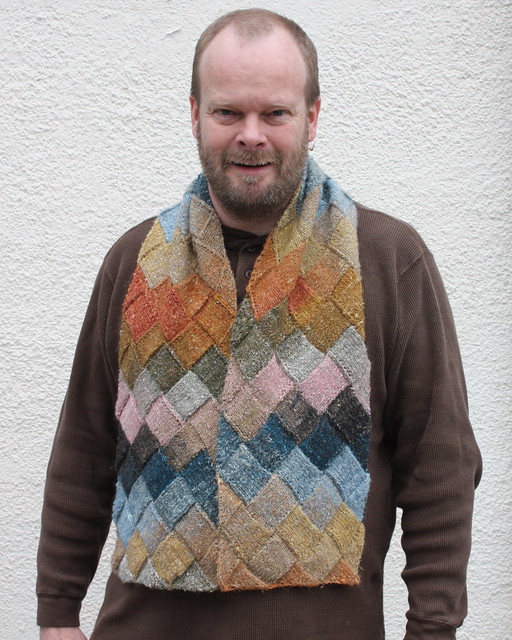 Several years ago I wanted to bring a retreat to Canada. However, it would never have happened without Danny and our friend, Jaye Crawford, who helped organize it. We also had extensive practical, tactical and even financial assistance from Joe Wilcox, an original founder and perennial organizer of the Men’s Spring Knitting Retreat at Easton Mountain. Others have helped, too. After wanting to do this for so long, I couldn’t be happier than to see it come to pass.

For this event we’re using Loyola House, a retreat centre at Ignatius Jesuit Centre on the north edge of Guelph. It provides all the meals. We have single private rooms and the run of a large community room with a fireplace and windows overlooking the countryside. We’re planning a field trip to Wellington Fibres angora goat farm and spinning mill, a yarn crawl, two workshop sessions and hopefully a bonfire, weather permitting. I expect everyone will also take advantage of unstructured time to simply sit, knit, talk and laugh.

We’re calling it Men’s Knitting Retreat North. So far 19 men have registered, which would be a perfect number, just as perfect as 35. But we still have room and time to register (April 12 at the latest). So guys who knit, if you’ve been undecided or have only just heard about it, sign up. Spinners, crocheters, weavers and other fibre crafters are welcome. So are those who don’t knit but want to learn.