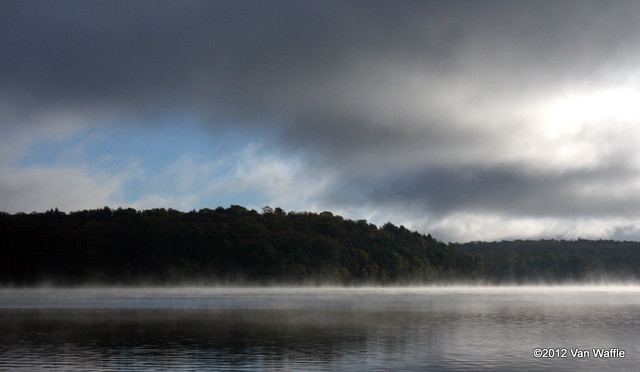 Seyyed Hossein Nasr blames environmental decline on “the divorce of our understanding of nature from the sacred and the spiritual.” The Islamic philosopher argues that Christianity in Western culture has failed to protect nature; and that Islam is a green religion. He believes God will judge individuals on their stewardship of the environment, while society as a whole will be punished for abusing nature. We must learn to live in harmony with other creatures or face suicide as a species; there is no third alternative, he says.

Tonight on the CBC Radio program Ideas, Paul Kennedy aired an interview with Dr. Nasr interspersed with parts of lecture he gave in Burnaby, British Columbia, last year. I caught part of it driving home in the rain from a meeting and found the entire episode online. When I first tuned in, I didn’t know what the program was about. At first I was disappointed to hear a cleric dismissing any effort to reconcile religion with science, which he considers a human construct.

Of course it’s a human construct, but so is religion. At least science is based on observations about what we know, while religion arises from what we fear and cannot know. What place has it, teaching us about climate change and environmental protection? – I thought. Religion has caused incalculable harm to the world we live in. Christianity today finds itself mute, divided and in denial about our pressing environmental questions.

However, I was attracted to examples Dr. Nasr gave of traditional nature poetry from the Middle East. For him, love of God can’t be separated from love of the natural world. By contrast, he says both the Catholic Church and Protestantism have failed to develop an environmental legacy. Theological conversations in North America have ostracized the most inspired thinkers about nature. Emerson was considered a heretic and Thoreau (who admired Indian spiritual writings such as the Bhagvat-Geeta) a pagan.

One frigid February day in 1998 I had an epiphany on the bank of the Eramosa River in Guelph. My relationship with religion had been disintegrating for a while. Annie Dillard‘s remarkable book about God and nature, Pilgrim at Tinker Creek, had helped keep me alive and believing in something during a traumatic period of my life. I had already stopped calling myself a Christian because I could no longer identify myself with the hateful, violent and murderous things multitudes of people have done in the name of Jesus.

But that day beside the river I realized I no longer believed in the god who threatened absolute punishment for lack of allegiance to him, to a faith, an idea. This self-centred divinity represented a mirror image of human narcissism, created by men who believed in their right to control the minds of others. Claims of unconditional love failed to hold up against the record of history. Such religion had nothing true or good about it. This feeble-hearted divinity could not have created the universe. It had nothing to do with the complexity of nature.

Since that river epiphany, I haven’t looked to any god but to nature, which has nourished and protected my physical, emotional and inspirational well-being since earliest childhood memories. We don’t need sacred texts to know that nature gives life. But more recently I’ve become aware that, for some people, nature and god are practically the same thing.

During tonight’s program, I was surprised by a distinction Dr. Nasr made. He said both Islam and Christianity traditionally value beauty and love, but Christianity holds love slightly higher, while Islam does beauty.

In the years since I became an atheist, in the struggle to find meaning without a religious framework, I’ve often considered what things I value most. Love, community, integrity and creativity come to mind (all part of nature), and beauty always places high on the list.

In my past experience with religion, beauty wasn’t important: whether a flower or a face, all beautiful things were considered transient and meaningless compared to God’s grace and plan for salvation – things utterly abstract. That faith pinned its hopes utterly outside the here and now. This contributes to radicalization of religion. Its followers assert that their truth is the only one, and no one can see anything to disprove their faith.

It’s impossible to relate to nature without encountering and appreciating beauty: the profound complexity of a forest ecosystem, the mathematical perfection of cosmology, or the fragile sufficiency of our own bodies. Atheism began to fit my way of thinking as I escaped ugliness, reaching for wonder.

Tonight I’m intrigued by this idea from an Islamic teacher about placing metaphysical value on beauty. Tonight it occurred to me I don’t need to continue being an atheist. We all take a certain pride in what we believe, and this pride is useless. Certainty is subject to change in perspective. I had to stop believing in the wrong kind of god. Perhaps (and I acknowledge this only hypothetically) it was necessary to step back before I could begin imagining a better kind.

But this line of thinking stops itself, for now. God has always been and can only be something in the imagination. People imagine God because they can’t face their own solitude or the grim nothingness of death. Faith might overcome fear, but I prefer to acknowledge and live with my dread of the uncertain, making the most of my time in thoughtful integrity.

I remain unconvinced that anything supernatural exists, or that we need to believe – or invent a belief – in order to live meaningful, responsible lives. Lack of faith doesn’t destine us to depravity; rather it should drive us to cherish everything and every living moment as much as possible. We must choose to build meaning for ourselves as long as we can. I still see a hopeful, co-operative path, finding a better future than the one we’re currently bent upon.

Uncertainty about what we know is almost as scary as dying. I accept my ambivalence and remain content. It’s a good place to be.