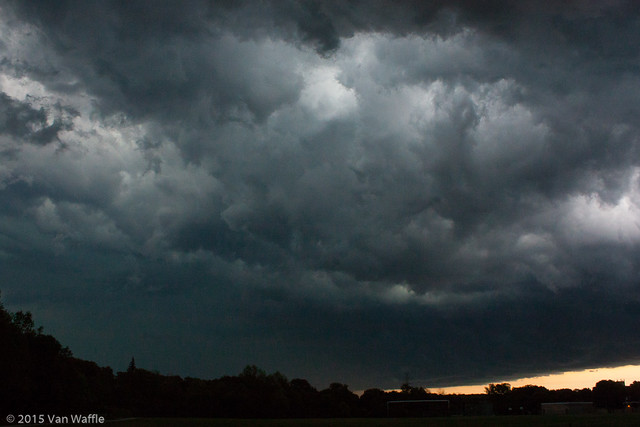 This afternoon my partner and I drove through one of the most frightening weather events I’ve experienced.

We had spent two hours working at a coffee shop in downtown Waterloo when I noticed the sky darkening outside. I looked at the forecast and there was a severe thunderstorm warning. So we decided to head for our car, which was parked several blocks way, before the rain and hail hit.

By the time we reached the car, we realized that, to get home, we would have to drive underneath one of the most dramatic shelf clouds I’ve ever seen. Bands of cloud in different shades of grey stretched overhead. I wished I had a camera with me then.

We started driving north on Albert Street, which runs from downtown Waterloo to our neighbourhood. We passed a few pedestrians who seemed blissfully unaware of the ominous sky.

At University Avenue, we had to stop behind two other cars for a red light. While we were waiting, the squall line passed overhead.

Construction on some high-rise apartment buildings has been underway there for several months. Dust whirled suddenly upward from the intersection. A group of young people trying to cross became half-enveloped in it. They began running in a panic. A giant crane almost directly overhead began turning on its tower. A man on the sidewalk to our left ran into a burst of wind carrying litter and debris. He stopped, watched the scene ahead uncertainly, turned and began walking away.

All the while, hardly any wind buffeted our car. It felt like being in a fishbowl with danger all around. I wanted to get out of the car and run for cover, but there was nowhere to go. I wanted the chaos to move, but it didn’t. The wind kept blowing everywhere except away. It seemed to get stuck in place between the tall buildings on the north side of University Avenue.

Finally, the light changed and the cars ahead of us proceeded through the intersection. I don’t remember where they went. The wind remained intense and chaotic. When we reached the corner, Albert Street ahead was dark, churning with dust. I didn’t want to go that way. I made a left turn, away from the direction the storm was moving, then turned right onto the next side street.

At first this appeared to be a mistake. It put us directly under the crane, which continued to sway. Further up the block, the strong winds continued, but I started to feel we had passed the worst. We entered a residential neighbourhood. Several people were out in the street, pulling aside large tree branches that must have come down only moments earlier. At the next corner, we jogged back to Albert Street and proceeded with a sense of relief.

Back home a few minutes later, my partner noted the sky to the east, which had just passed over, was bottle green. I took my camera to the playing field behind our house and took some photos of the back end of the storm.

Not until I was back in my office looking at the photos, did the thundershower start with loonie-sized hail.

Reading about the cloud formation we saw, I glean that such shelf clouds may form at the leading edge or squall line of a thunderstorm. In this part of the storm the wind may be too disorganized to form a tornado and yet strong enough to cause damage. But with the right conditions, tornadoes can form along squall lines.

Over the years I’ve seen funnel clouds twice. One was accompanied by such torrential rain that I could only pull to the side of the highway along with transport trucks and other cars, and hope the tornado didn’t come our way. I don’t know whether the thing we saw today was a wannabe tornado, but it was one of the scariest weather I’ve come through. 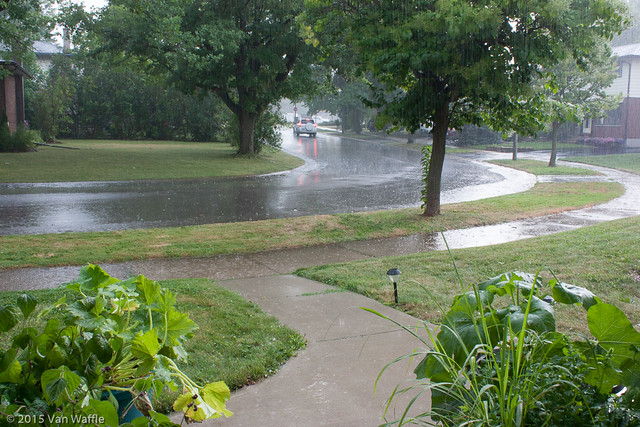