St. Jacobs Farmers’ Market has not only recovered from disaster, but seems stronger than ever. Less than two years ago fire leveled the main barn, but the place hardly skipped a heartbeat. The flea market and outdoor produce vendors remained open, while a permanent tent was shortly installed to house food, largely butchers and cheese sellers. Last week the new barn opened, pictured above.

At the time of the fire it was identified as the largest year-round farmers’ market in Canada, surpassing even the likes of St. Lawrence Market in Toronto. It combines with artisans in the village itself and local Mennonite culture to make St. Jacobs a significant Ontario tourism destination.

St. Jacobs lies on the outskirts of Waterloo, a city of approximately 135,000 twinned with its larger sister, adjoining Kitchener. My partner and I moved to Waterloo in March. The farmers’ market lies a seven-minute drive from our door and has become an essential stop our our weekly grocery round. We’ve started going Thursday mornings, when the place hums like a hive but not as madly as Saturdays.

The new barn, though shaped differently, evokes the same style as the old building. The main floor has three wide aisles offering not only meat and cheese but also local honey, specialty teas, bakeries and more. The upstairs gallery opens onto spacious stalls for craftspeople and boutique goods. 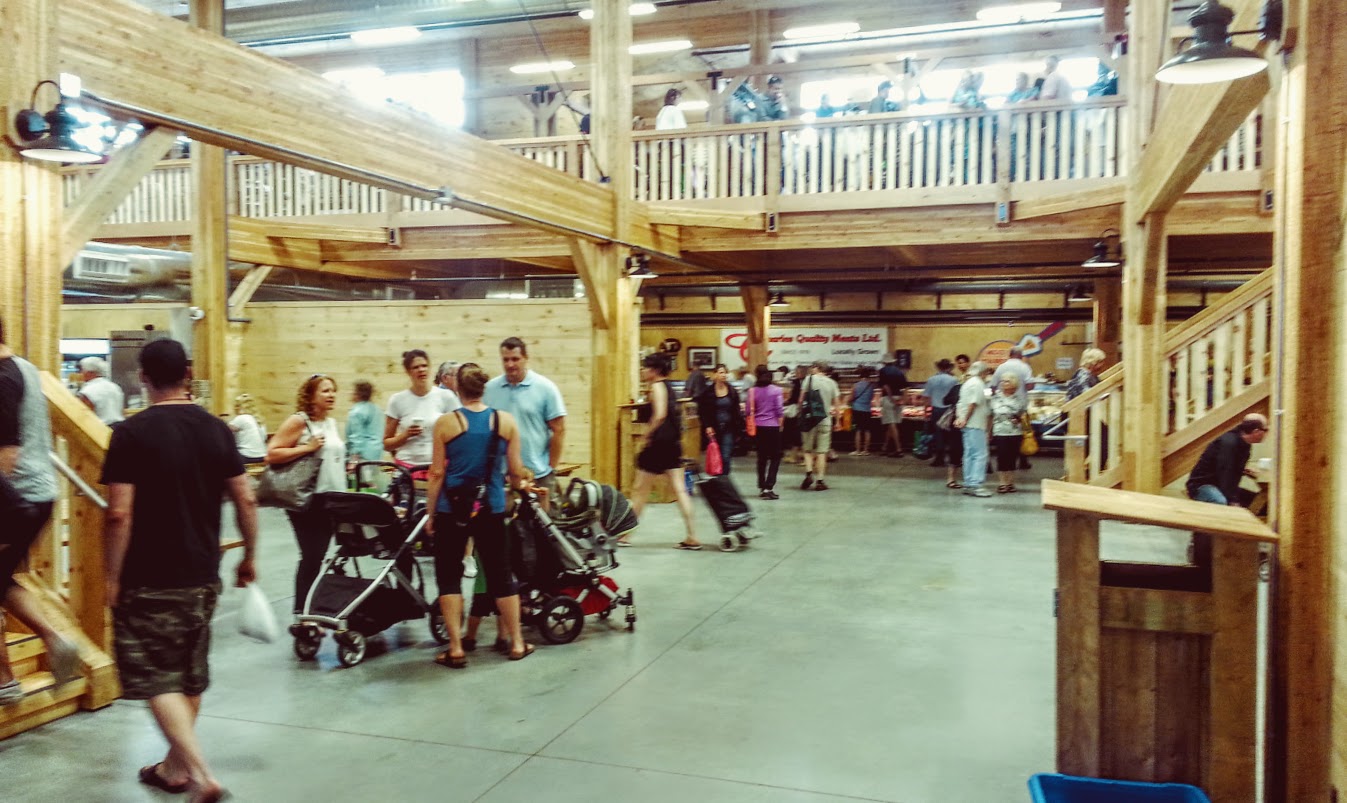 The flea market and outdoor vendors are so numerous and varied, you can find almost anything. It’s a good place to shop for antiques, cheap clothes and plastic junk, but there’s a lot of good-quality craftsmanship to be found.

The produce mostly strings along one of the outdoor avenues, shrinking to almost nothing during the coldest winter weather. But shoppers beware: many of these vendors resell goods, largely imported. There’s no way of knowing the quality or provenance. I’ve bought bags of good-looking sweet peppers only to find they’re bad on the insides. The “Ontario strawberries” we brought home last week, surprisingly early for our season, were beautiful but bland and started rotting two days later. I’m learning that for quality local produce I must get to know the vendors and whom to avoid.

Any Ontario potatoes or mushrooms we’ve ever bought there have been worthwhile. So many local Mennonites offer tables covered with jugs of maple syrup, you’d have to be an idiot to try selling an imitation.

On the extreme west side of the seasonal vendors, closest to Weber Street, there’s a short row with a distinctly local quality. This week it offered local asparagus (still slender), leaf lettuce, kale, rhubarb, the first field strawberries of the season and mushrooms grown outdoors. These people act and dress like proud farmers instead of street vendors trying to up-sell cheap goods. Watch for them.

One of our favourite stops is Little B’s Gluten Free Bakery. They’ve newly relocated to outside the front wall of the main food building, offering all kinds of baked sweets from spring to fall. Our favourites are the fruit tarts and butter tarts. You can find other gluten-free items around the market, but Little B’s are the best.

Of course it’s hard to resist The Fritter Co. After the fire destroyed all their equipment, they reopened a few months later in one of the flea market barns. The main food barn appears to have some food court stalls still under construction, so maybe the fritters will be moving there; I don’t know.

Take a sliced apple disc, dip it in batter, deep-fry it and this is what you get. Scale it up with ice cream, or not.

Of course these are not gluten free. I hadn’t touched one in years, but when I started the gluten challenge in April I made a bee-line for The Fritter Co. It was my first stop.

Since I don’t seem to be experiencing any symptoms after eight wheat-filled weeks, who knows? That’s another whole story. Maybe I won’t be following a gluten-free diet any longer, but the jury is out until I go for a biopsy in July. I’ve found gluten-free food can be nutritious and delicious, so the outcome is unlikely to drastically change my eating habits. For treats I can still go both ways.

Another thing: if you want to buy a traditional quilt, St. Jacobs is the place to shop. I know of three locations, but there are probably more. Quilted Heirlooms occupies a log cabin at the south end of the market, on Farmers Market Road. The store also sells quilting supplies. Esther Weber Quilts is one of the artisan shops in the upper level of the main barn. But the largest selection can be found at Grey Fort Quilts in St. Jacobs village. These are hand-stitched by local Mennonite women.

Happily, St. Jacobs is busy as ever, with temptations lying around every corner.