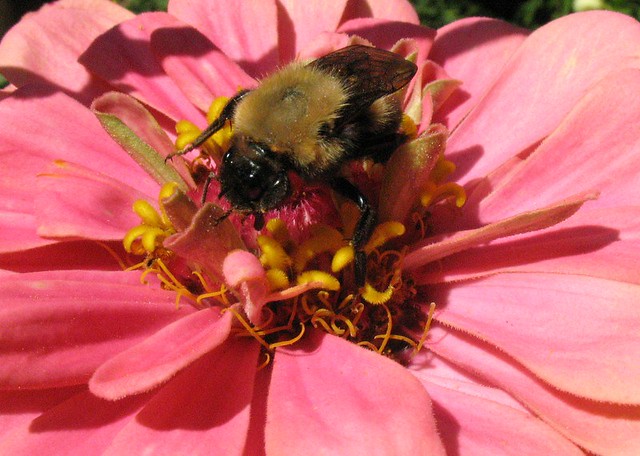 Your garden might not be humming with bumblebees, but scientists this week are buzzing with a possible reason why. Neonicotinoid pesticides have in the past been blamed for colony collapse disorder in honey bees and sudden, massive die-offs of bumblebees. New research has added evidence, showing that this type of pesticide impairs bumblebees’ ability to collect food. There is also new evidence this problem is cascading up the food chain to affect birds.

Young bumblebees normally become more effective foragers with age. A study published in Functional Ecology this week found that young bees exposed to pesticide started off collecting less pollen than healthy bees, and their performance did not improve. The affected insects also appear to change their flower preference. Poor foraging behaviour threatens the health and survival of bee colonies. More details on this University of Guelph study were published by CBC News.

This is only the latest evidence connecting neonicotinoids with bee mortality. Coincidentally, the concern received response from governments and industry this week.

Ontario Agriculture Minister Jeff Leal announced the government is looking for ways to restrict the use of these pesticides in the province.

Last month, Friends of the Earth released a study showing that many nurseries across Canada and the United States routinely treat plants with neonicotinoid pesticides. Many people buy these flowering plants intending to attract bees, and end up exposing them to a toxin. Friends of the Earth drew particular attention to Home Depot, Walmart and Lowe’s.

This week Home Depot Canada announced it will begin labeling plants exposed to neonicotinoids, following the lead of its U.S. parent.

But now the consequences of pesticide use are showing further up the food chain. This isn’t the first time, of course. Rachel Carson raised the alarm about DDT affecting birds in her 1962 book, Silent Spring.

In that case, DDT concentrated at the top of the food chain, in birds of prey. It weakened their eggs, causing them to break before maturity. Species such as the bald eagle were disappearing before governments responded by banning the pesticide.

Neonicotinoids appear to be affecting a different group of birds, aerial insectivores, by depleting their preferred food. Insects provide an especially important protein-rich food source during the spring when birds are raising their young. A variety of insectivorous bird species have declined seriously around the world in recent years, but scientists have been hard-pressed to find direct evidence for the role of pesticides.

However, a new Dutch study published in Nature found insectivorous birds have declined most seriously in parts of the country where surface water was most contaminated by neonicotinoids since the pesticides’ introduction in the 1990s. This provides some of the clearest insight so far in a serious problem that has stumped bird ecologists for years. The picture is still unclear, but presents a warning that these chemicals may have an even more serious effect on biodiversity than was previously suspected. See the Nature editorial about this study.