The amaryllis is a popular indoor bulb providing exotic colour for the winter household. My mother always had amaryllis blooming at Christmas time, so in December my partner and I picked up a kit from the supermarket for nostalgia’s sake. This solid orangey-red one reminds me of the cultivars she used to prefer. It provided one stalk of four big flowers and, just as they were fading, another stalk of four. So we have had this splendid winter colour in our kitchen for weeks now. But in the world of botany, many things are not what they seem. It turns out an amaryllis is not really an amaryllis.

While you think on that one, here is another cultivar I grew a few years back. 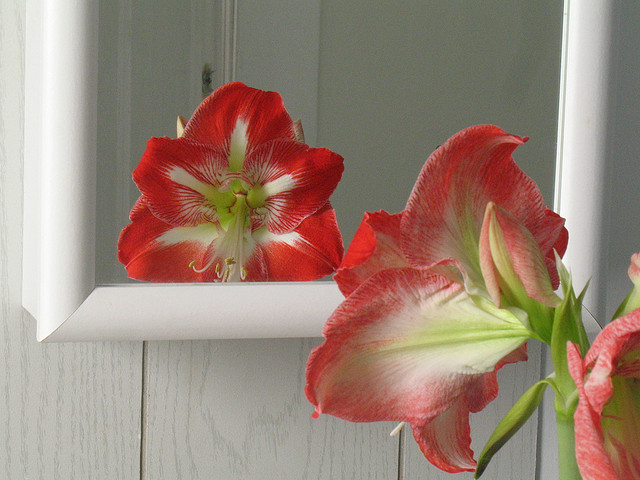 Carl Linnaeus, the father of taxonomy, described a plant named Amaryllis belladonna in 1753. Apparently he grouped together some species from South Africa and South America in one genus. It has since been determined that these belong in two different genera. A. belladonna is a South African plant. The plants popularly known as amaryllis actually belong to the large genus of South American plants, which are scientifically known as Hippeastrum.

Here’s another Hippeastrum from a few years ago. Apparently the Latin name refers to that deadly Medieval weapon, the morning-star.

Amaryllis AKA Hippieastrum are best summered by sinking them outdoors in light shade so their strap-like leaves can feed off the sun and absorb energy for next winter’s show. So I will try to do.

January 15 is Garden Bloggers Bloom Day so hop over to the home blog to see what else other gardeners have to show this January.