I was watering the garden in morning shade when I heard a rustle beyond the gate. I glanced up. There stood a white-tailed deer, gazing back at me with dewy eyes, not 4 metres (13 feet) away. We often see her breed of ghost drift through the pine plantation, but never so close, not here. I moved one step closer, speaking softly, and she kept steady.

It was her time of day. Deer are crepuscular, most active at dawn and dusk. They follow the same paths but never bed down in the same place twice. Wary of lurkers, they do not sleep deeply. They use scent glands to communicate with one another but the fawns are born with no smell to avoid attracting predators. The doe eats her fawn’s wastes to keep its bedding area clean.

When alarmed, they bound away waving white undersides of their tails to warn companions. Jaye and I saw a herd of four flying, tails flickering like flags, the day we scouted Luther Marsh for the Baillie Birdathon. They saw us from a great distance and quickly vacated the field. I think the phrase “high-tailed it” must come from white-tailed deer. The city deer are much less shy, yet my visitor was all eyes, ears and nose. 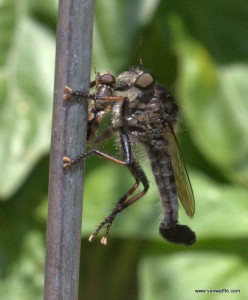 Joe Hutto’s book about wild turkeys inspired me to pay closer attention to the ways animals pay attention. The other day I watched a robber fly perched on a tomato cage dart out and seize a smaller fly. They have superior vision and a keen predatory awareness, but are they conscious? It is hard to get a reading on insects because they lack facial expressions and body language, important cues we use unconsciously to analyze our social environment.

It was easier to empathize with the doe. She watched me calmly, her searching gaze unaccompanied by muscle tension or an alarm-flag tail. Her eyes locked mine. We engaged more intimately than many strangers on the street.

Not long ago I walked out on the deck and discovered a small boy in our backyard. His mother stood at the gate. A toy airplane had flown into our yard and she had let him in to retrieve it. No problem, but the woman did not acknowledge me. Taking the cue from his mother, the child ignored me. A minor trespass to retrieve a toy is one thing, but treating the occupant as invisible is rude.To a deer I am at least a neighbour worthy of her awareness.

I heard the doe inhale. I had tossed some potato vines over the back fence the day before. She bent her neck to smell them more closely, but did not have the boldness to approach any closer. After a minute she turned and faded into the pine shadows. Then I noticed her companion, another doe in the distance, move away without ever making a sound.

It is easy for people to become overstimulated and desensitized. Unfortunately that leads us to filter out the non-essentials. In effect we shut off parts of our consciousness. Opting out of total sensual immersion, we risk mental atrophy. We make ourselves stupid. How far must we go to lose consciousness, dissolve into the mist of evolutionary oblivion?

We may not possess the acute sight, smell and hearing of wildlife such as white-tailed deer, but we should use our highly-developed brains to expand consciousness. Immerse fully in what senses you have. Cultivate mindfulness and curiosity.